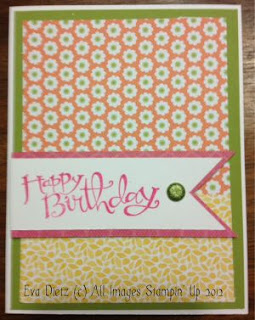 I know this card isn't very fall-ish but I still like and hope you do too!  This is one of four of my stamp camp cards for the month of October. I was inspired by a swap I received at Convention, but don't have a name to credit.
Very simple card to construct: Whisper White and Wild Wasabi cardstocks. Floral District Designer Series Paper - 3 different designs. Sassy Salutations Stamp Set, with Brights glimmer brad.
I learned a trick about cutting those pennant ends perfectly while I was at Regional last weekend. The suggestion was to cut in the middle of the strip and go in as far you desire, THEN do the two angle cuts. Voila!

Posted by Homemade with Heart at 9:47:00 AM
Email ThisBlogThis!Share to TwitterShare to FacebookShare to Pinterest
Labels: Floral District DSP, sassy salutations

Thanks for stopping by!
:-) Eva